My sister bought a fab book from TK Max, looking through it I found three fantastic old places in London that no longer exist, but all had one thing in common, ...beautiful carving.

The first was the Dog and Bowl sign, 196 Blackfriars Road in Shoreditch.It was originally an ironmongers sign (1793), but stayed in place until the building that it was attached to was bombed. It is now in Cumings Museum. Charles Dickens used to walk by the shop when he was a boy and mentioned it in his autobiography...

'My usual way home was over Blackfriars Bridge, and down that turning in the Blackfriars Road which has Rowlands Hill's chapel on one side, and the likeness of a golden dog licking a golden pot over a shop door on the other'. 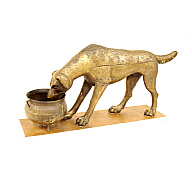 The second is a wonderful cockerel, very similar to the fairground roundabout  cockerels.

The gilded cockerel was once above The Cock pub in Fleet Street. This pub, once visited by Thackeray, Dickens, Pepys and Tennyson was demolished in 1887. The cockerel was moved to an alcove above Edward Maunds joinery shop at 336 Old Street, Shoreditch.....I wonder where it is now ?

The cock was of a larger egg

Stept forward on a firmer legg,

And cramm'd a plumper crop. 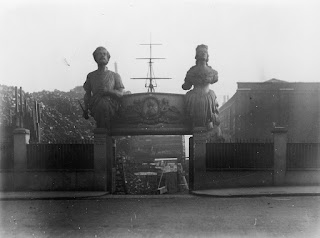 The last but not least is the wonderful yard of Henry Castle & Son,      Ship breakers....I would have loved to see this ! I suppose years ago when I stayed at Brillscote Farm for the Relic Antique auction was the closest I got to a similar atmosphere.. Grierson Gower and Malcolm Gliksten had barns full of old shops and contents, fairground rides, waggon's...signs...even one of  the cockpits of Concorde! Henry Castle had a big business dismantling old wooden ships and had an eye for the beautiful ships figureheads that had great affection from the crews of the old wooden ships.Legend has it that Turner's 'Fighting Temeraire being towed to Castle yard in his famous painting. Henry Castle also recycled the ships timbers into garden furniture that could be designed and produced for the customer on the same day.