I'm sure we have all taken a bit of seaweed home to hang on a door so an try to forecast the weather. Its dry when warm and starts to go limp and soggy when the air starts to get damp. I brought some home from North Berwick but daftly forgot it and then found it weeks later rotting in the bottom of a carrier bag...yuk !

Robert Louis Stevenson described North Berwick as ''A fishing village with drying nets, scolding wives, the smell of fish and seaweed and the blowing sands ''

The seaweeds in North Berwick are impressive, beautiful clear sea water and ragged rocks showed them at their best.

On Lewis on All Hallows Eve- 31st November the start of the Celtic new year people would walk in a procession from the church to the sea. A man would then wade in and offer a cup of beer to the sea god Shoney.The Shoney are now thought to be fairies living off the coast of Scotland and Ireland. 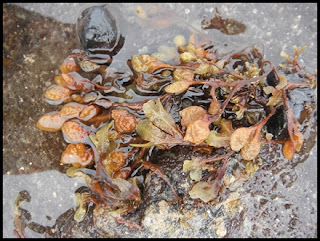 The first seaweeds collected on New Years day in Aberdeenshire would be put around doors to give thanks for good harvests. 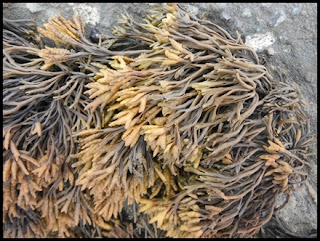 On Maundy Thursday in the Hebrides a huge pot of Porridge was poured over a cliff side into the sea to the sea gods, all praying for a good seaweed harvest. 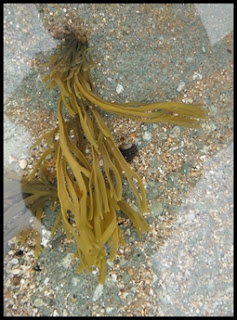 Kelpies are faeries that live in water. are small with large teeth and pointed ears are known as being sly and stupid. They would appear as seahorses and try to get humans to ride on them so that they could drown them. Kelpies could also change into handsome young men with seaweed as hair tempting ladies to their deaths. 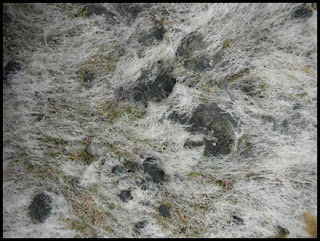 Why did the seaweed blush ? Because it saw the ships bottom !