Towards the end of my holiday with my family in Edinburgh, I discovered the decorative painting work of James Norrie. There is part of a paneled room in  The museum of Scotland taken from a house in Riddles Court, not far from the Castle. Once I arrived home, I tried to find out more information about him and write a blog. 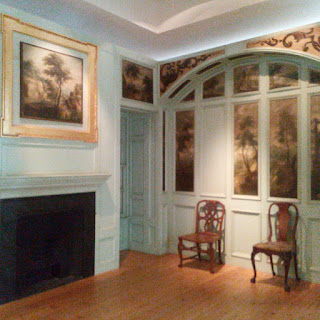 In the eighteenth Century James Norrie, and two of his sons, James and Robert, dominated the decorative painting scene in Scotland, employing both plain and decorative artists.
They were known for painting panels with colour and monochrome ( grisaille) classical landscapes, some real and others imagined, but often without people. They were influenced by the work of Claude Lorain (1604-1682) , Pannini  (1691- 1765) and Gaspard Dughet (1615-1675).
When Claude Lorain painted Hagar and the angel , he had to include figures because fashion and the establishment did not recognise landscape painting as good art. Lorain said ''I paint the landscape, the figures are gratis''. For a long time paintings could have beautiful landscapes ,but to be high in the hierarchy of genres, they needed to include people and have a story from Classical mythology or the Bible. When Constable (1776-1837) saw this painting in 1790, it influenced him to paint full natural landscapes. I'm sure that James Norrie would have heard of the beautiful painted rooms in Italy and must have been in great demand. Paneled, wood grained and gilded rooms with lots of arcadian landscapes would have been extremely fashionable.
James Norie came from Morayshire, north eastern Scotland and trained in Edinburgh with Thomas Warrender.(1662-1715) In 1729 James and his son James became founder members of The Edinburgh Academy of St Luke, the first art academy in city.
The 3rd Duke of Argyll employed James Norrie to paint at his Scottish estates, the Whim, Brunstone House and Inveraray. His best work is thought to be the Italian room in Prestonfield House in Edinburgh.
The room I saw in the Museum,had been discovered under layers of paint in the 1960's. They had been commissioned by Lord Royston. When the building was rented one of the tenants had actually burnt some of the panels to keep warm!
The family business continued until 1849 when it was taken over by Laurie & Glover. James descendant's worked as painters and also supplied materials and painted oil cloth.
The Norie family link with painting continued until 1849 . The family not only worked as painters but they also supplied materials, painted oil cloth. One customer was Cosmo George, 3rd Duke of Gordon, whom they supplied with watercolours, brushes and paper.
Some apprentices became landscape painters and engravers in their own right. Alexander Runciman  (1736-1785),became known for watercolour landscapes after working for Robert Norrie & Coy in 1750. He was the son of a builder and was apprenticed at the age of fourteen, In 1766 he started to produce historical paintings. His landscapes were well appreciated but made him no money, so in 1766, unlike Constable he followed the fashionable route., producing historical paintings. John H. ''Jock'' Wilson(1774 in Ayr – 1855 in Folkestone) was apprenticed at thirteen and later became landscape and marine painter. In 1827 he became the president of the Society of British Artists
James Taylor who had been an apprentice to Robert Norie entered into partnership with Roberts son (d.1766), the second Robert Norie (1766-1821), calling themselves Norie & Taylor , then from 1800 they were known as Taylor & Norie, before being dissolved in 1814. In 1820 the third Robert Norrie (b.1790) had a floor cloth warehouse at West Register St and an oil and colour shop at 141 High St . Norrie's house is 16 Broad Street , I don't know if there is a wall plaque or even if the house and street exists, but it would be good to make more people aware of their impact on the landscape painting history in Scotland.
I'm looking forward to visiting more places next year to view his lovely work.
Where some of Norries work is still intact.
Caroline Park, Granton, Edinburgh (where Lord Royston had his country house),
Newhailes House, East Lothian
Prestonfield.
Hopetoun House - The Bruce bedchamber - florals and leaf decoration.
Chessels Court, Edinburgh - panels possibly by James Norrie
Haddo House - painting by John Norrie
http://www.electricscotland.com/art/artinscotland06.htm
Picture of Edinburgh by John Stark
Essays on David Hume by Roger l. Emerson
http://www.shbt.org.uk/files/2314/0534/7514/PGC
http://www.npg.org.uk/research/programmes/directory-of-suppliers/t
http://www.arcadja.com/auctions/en/norie_james/artist/34540/
http://www.helenhughes-hirc.com/wp-content/uploads/2015/06/Phase-2-Riddles-Court-Report-with-Paint-Analysis-Appendix.pdf
http://www.gac.culture.gov.uk/work.aspx?obj=23511&pid=137986&tb=2
tagPlaceholderTags: james norrie, landscape painter
Powr.io content is not displayed due to your current cookie settings. Click on the cookie policy (functional and marketing) to agree to the Powr.io cookie policy and view the content. You can find out more about this in the Powr.io privacy policy.