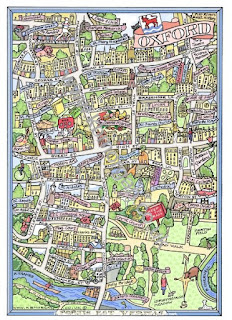 ⦁ Fawn- Is this Mr Tumness? The door to Narnia

⦁ Books - More published authors per square mile than anywhere else in the world.

⦁ JRR Tolkein- Lord of the rings- Professor of English at Merton

⦁ Coffee cup - First cups of coffee were served in the Grand Cafe.

⦁ Alice - Alice Liddell was the daughter of the leader of Christ Church college.Lewis              Carroll,( Charles Dodgson), taught at the university

⦁ Bear - The Bear Inn is one of the oldest pubs in Oxford dating back to 1242.

⦁ Hogwarts - The great staircase and cloisters are in Christ Church, but the halls were a          film set built in london.

⦁ Ox- 'oxanforda' the old name for Oxford meaning a ford where oxon could cross.

⦁ Gandalf- based on Odin.

⦁ Frideswide - A saxon princess and healer who became the Patron Saint of Oxford.

⦁ Oxfam- founded in the store on Broad Street in 1942

⦁ Castle - Was a monastic community. Geoffrey of Monmouth wrote ' History of the Kings of         England ' , a compilation of Arthurian legends.